Joined Jan 7, 2018
·
20 Posts
alright I can't wait to check out what happens with the pi4 install /geek_status/
I recently setup pihole on my home network with a pi-zero wifi model - so simple its great

undivide said:
alright I can't wait to check out what happens with the pi4 install /geek_status/
I recently setup pihole on my home network with a pi-zero wifi model - so simple its great
Click to expand...

Was thinking emulation station primarily. Imagining cruising through "downtown" , with my son in the back seat playing Pac-Man, and the stereo pumping out "Waka Waka" and the likes as we drive along and seeing what sort of reactions we can get from people.🤣

2008 Honda Pilot EX-L
Joined 6 mo ago
·
259 Posts
Been distracted the last few days, pondering how I would power up and down the Pi4 gracefully. Hooking it directly up to Accessory 12V source is a recipe for disaster, and corrupting the SD Card. So after some thinking, decided I'm going to use a ATtiny85 for the task. Goal is to trigger an interrupt on the Pi to power it on, and use that same interrupt to "shut down". Will be using a Transitor for that. As for detecting voltage, will be using a voltage divider to reduce the 11-17V input down to under 5V. Both the ATtiny85 and Pi4 would have constant access to constant power (12+V stepped down to 5V). The ATtiny85 circuit is expected to suck less than 1mah, and while the Pi is asleep it's power usage is about .5mah. Goal is also to have the ATtiny85 being running the equivalent of "Ping" & "Pong" over a serial connection to the Pi as well, to detect when it's awake/powered up, and also pass voltage readings to the Pi as well.

Got some spare time today, and decided to start working on replacing the front speakers.

First step, drilled a 1.5" hole into the Sail panel for each side: 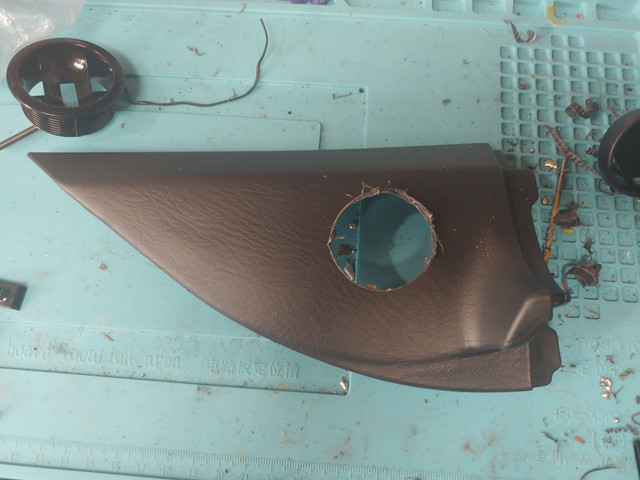 Then enlarged the hole with a sandpaper bit on my dremel to fit the mounting plate. 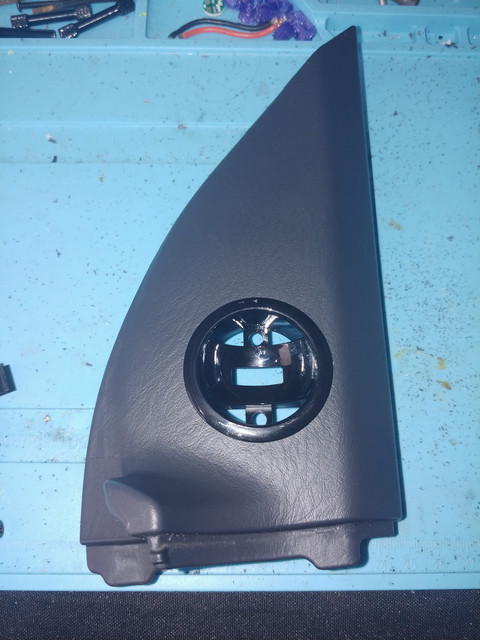 Completed the passenger side first: 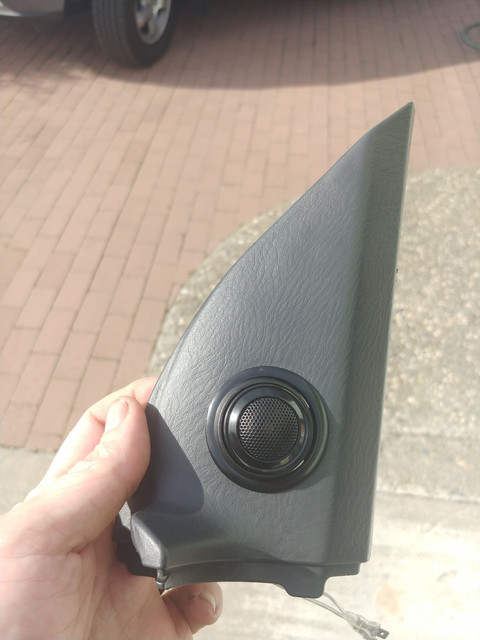 Front of both sail panels: 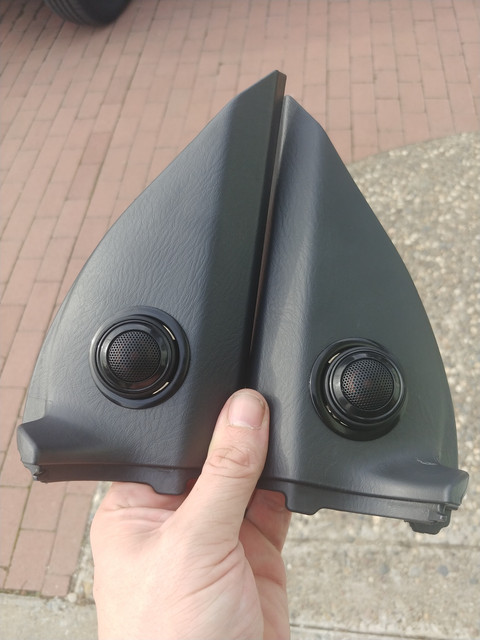 Backs of each sail panel: 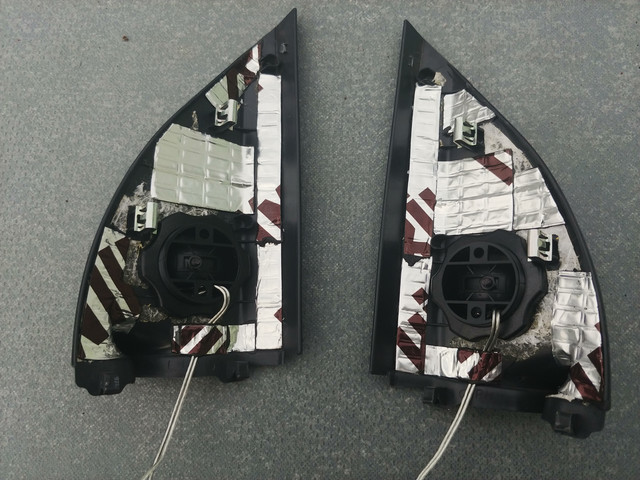 Crimped on Fork Spade connectors for the Crossover: 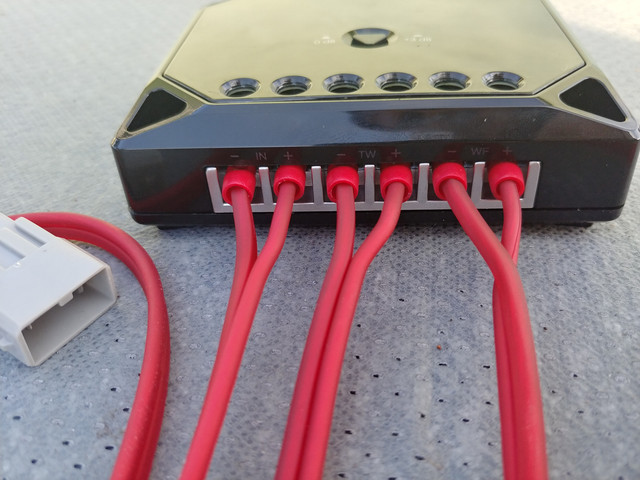 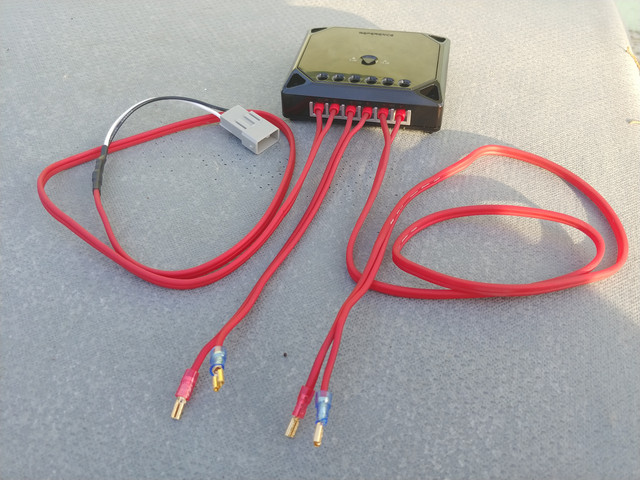 A picture of both crossover's, and their wiring 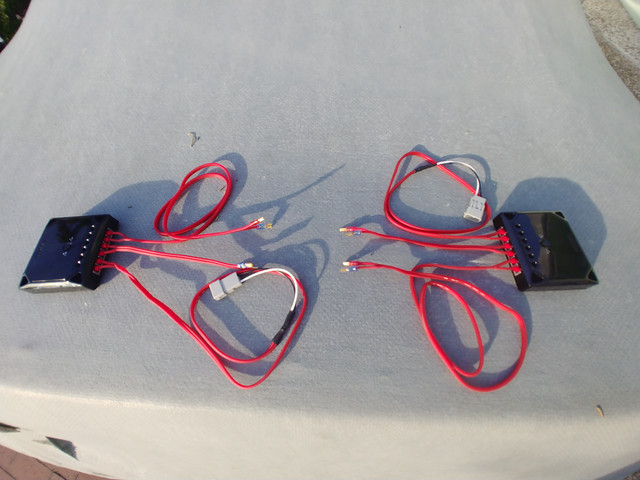 Taking things to the next level with Tesa tape: 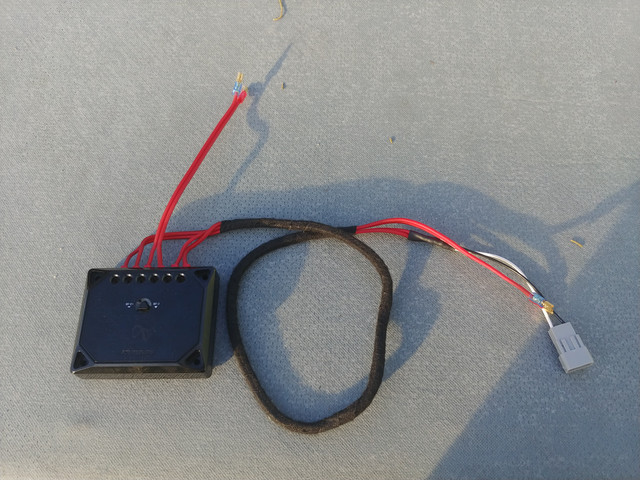 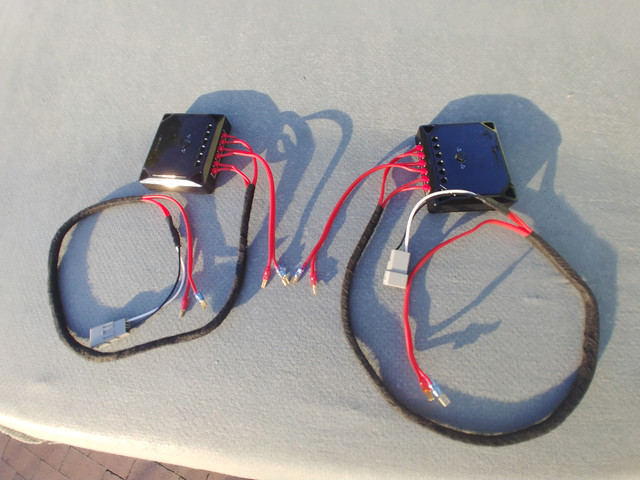 Plan is tomorrow when the wife get's home from work, gonna pop off the door panels, and complete the install of the front speakers.

Took the time also today to poke my head under the driver side dash to try and see what options I have for passing the power supply wire for the future amp into the cabin. Looks like I'm just going to follow the main harness, and when it comes to the firewall, likely just going to poke a small hole in the factory grommet (to the side of the main bundle), and force the wire through it. Then I'll have that run behind the center console, and down the side of it under the carpet on the passenger side, to under the passenger seat.

As for the rest of the system, probably going to take advantage of my day's off this Thanksgiving, and use those to prepare the sub, backup camera, and install the deck. Only things that will be left afterwards (if everything goes to plan) will be running the wire for the Mic to the inside of the front dome light housing (same place as factory if you have a model that came with Nav), replacing the SiriusXM antenna (factory location), and running a set of component cables to the RES from the new deck, which all require the headliner to be dropped (which I'll also be adding some closed-foam insulation/sound deadening as well).

2008 Honda Pilot EX-L
Joined 6 mo ago
·
259 Posts
So today I finally tackled the actual install of the front door speakers. I've gotten really good/fast at removing the door panels, takes me about 3 minutes or less to remove/disconnect everything for each one. Never installed components like this before, or taken as much time to pay attention to detail (which was primarily a factor of limited money/experience), so underestimated how long it would take do everything, but overall super pleased with the result, and recommend anyone running factory speakers to consider upgrading to these Infinity Reference's.

Here is with the cross-over hooked up (though that's not exactly the spot I mounted it, refer to previous picture where it's under the fiber mat on the actual plastic door panel itself, held on with velcro.) 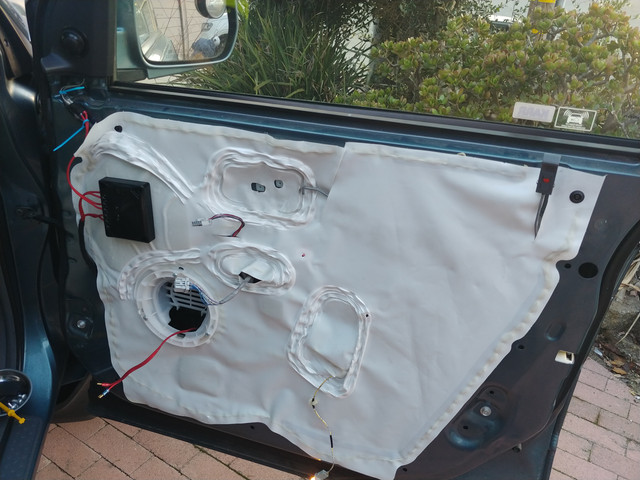 Add some sound deadening to the speaker cups: 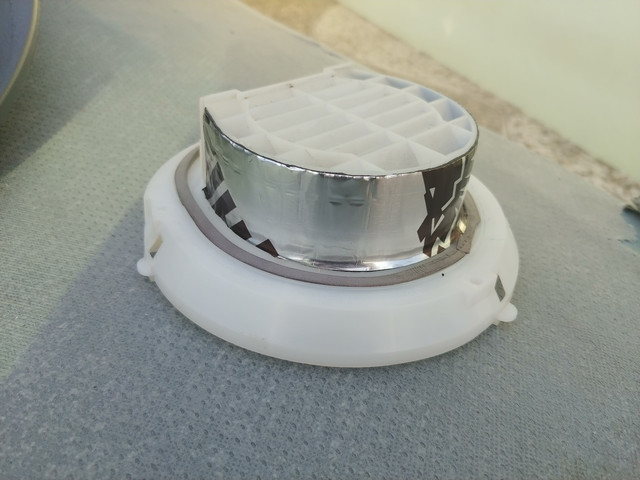 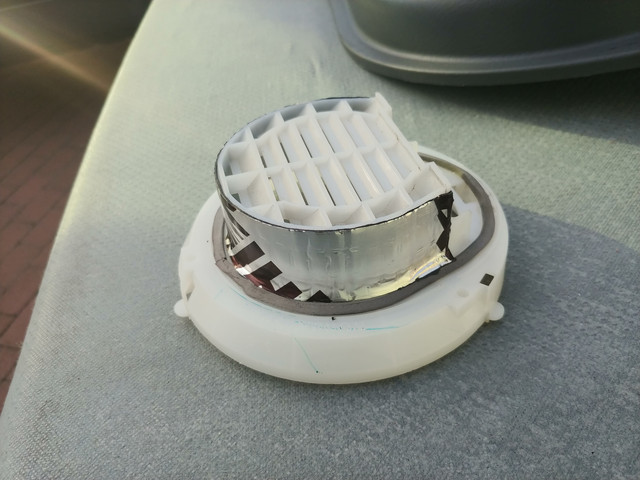 Here are some pictures with the woofer mounted: 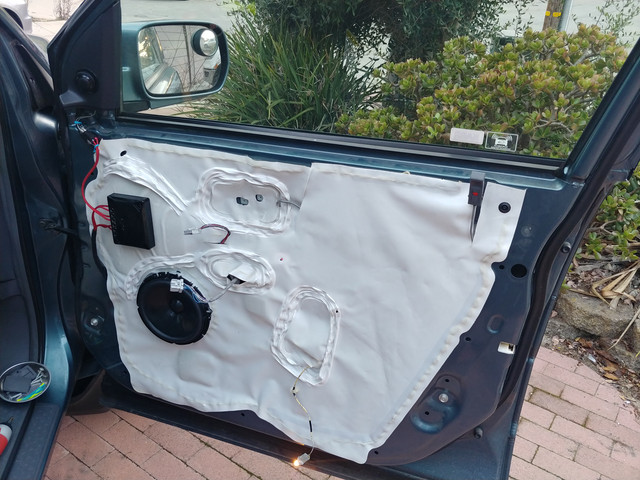 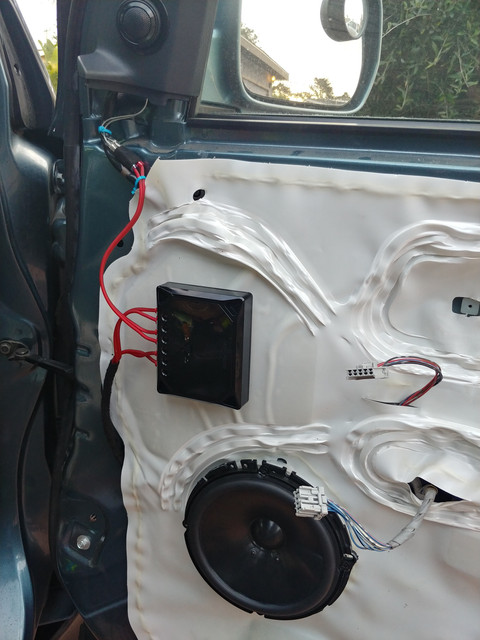 Here is the tweeter removed from the factory bracket: 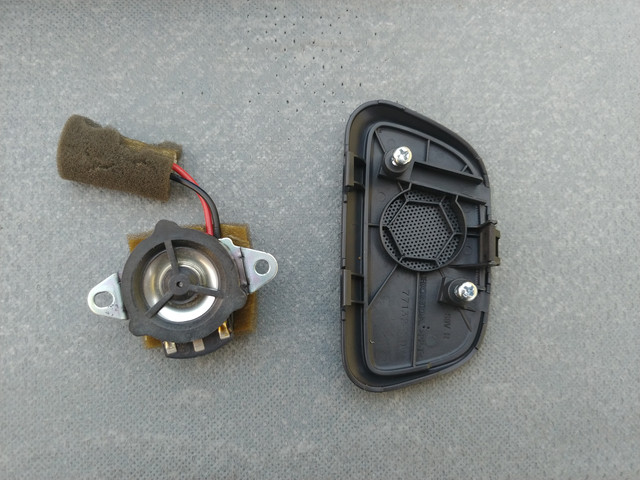 Here you can see the Capacitor acting as a high-pass filter for the factory tweeter. 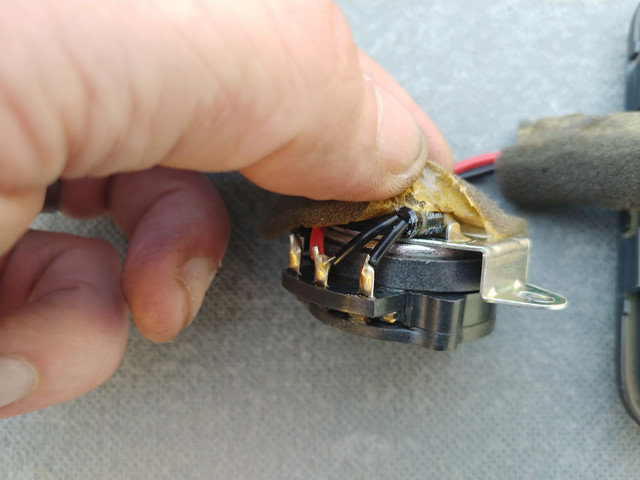 Here is with everything buttoned up on the driver side (and a picture of my completely stock 09 Manual Fit Sport [GE8] with around 88k trouble-free miles in the background that loves to take corners, and has no problem hauling ass on inclines, and making BMW drivers feel emasculated as I zip by at 80mph in my econo-box ) 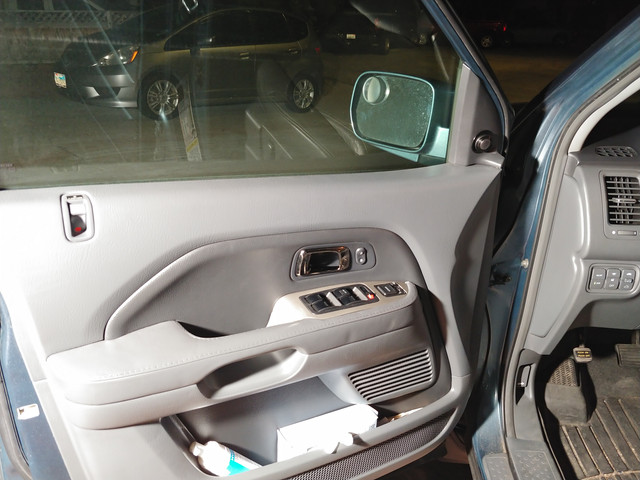 Of course, took it out for a test drive, and the difference in overall sound quality, and volume is huge. The mids/bass has improved so much, I can feel the low notes they produce through the seat. Also high pitched sounds are more pronounced, and details/subtleties in the music are more apparent than previously. Also overall volume of the system is increased significantly. Before I could find myself turning the stereo up to 35 or more. Now anywhere from 25-30 provides more than adequate volume. The "sweet spot" on the deck for Bass is +1, and Treble +1. I also shifted the Front to Rear sound to be more Centered (as it was +2 Fronts before). Overall very pleased with the outcome of the install so far. Can't wait to pop out that factory subwoofer, and sound-deaden that cavity as I upgrade it, since it's a noticeable source of distortion/rattle presently.

Thanks to Covid, not going to be really celebrating Thanksgiving, so that gives me all of Thursday, Friday, and Saturday to tackle the majority of the other things (weather cooperating).
161 - 167 of 167 Posts
Join the discussion
Continue with Facebook
Continue with Google
or sign up with email
About this Discussion
166 Replies
14 Participants
Last post:
cloudasc 1 d ago
Honda Pilot - Honda Pilot Forums
Piloteers.org forum community offers tech info, troubleshooting, modification DIY’s and discussion for the Honda Pilot SUV.
Full Forum Listing
Explore Our Forums
General Discussions 2016- Third generation Pilot 2003-2008 Pilot 2009-2011 Pilot 2012-2015 Pilot
Recommended Communities